PingTank redefines the way you express yourself

You know that feeling when you discover something so cool it has you hopping in, or even out of, your chair from pure excitement? That is exactly what happened to me when I discovered PingTank. The guys behind PingTank came up with an app so awesome that Facebook snapped it right up before someone else (read Instagram) could. Of course, me being a huge Facebook fan (that sounds so much better than a total Facebook addict or junkie, right?) I probably got more excited than the average person who likes to get creative with their pictures.

What is PingTank I hear you ask?

PingTank for Messenger allows you to customize your photos with 2D and 3D animation overlays to truly express how you feel. Take a picture or select one from your photos and choose from their database of free 2D and 3D animation overlays to customize your pics. Let’s say you’re feeling down, you can add a raining thundercloud over your head. Happy? Have smileys pop up all over your picture. There are options for every single emotion right down to robots making stuff explode. And of course, there are more options then you can possibly imagine for today’s selfie-loving narcissist (in other words: just about half the western world population under 30 years old). Then you share your creation directly on Facebook messenger. Your friends can then Ping It (aka Like it) or Tank it (Dislike it). It’s really true folks. PingTank had the courage to actually go where no other application dared go yet and they are giving a dislike option! Now you can legitimately tell your friends that their efforts suck and you hate them (the efforts, not the friends). Now doesn’t that sound like hours of fun? 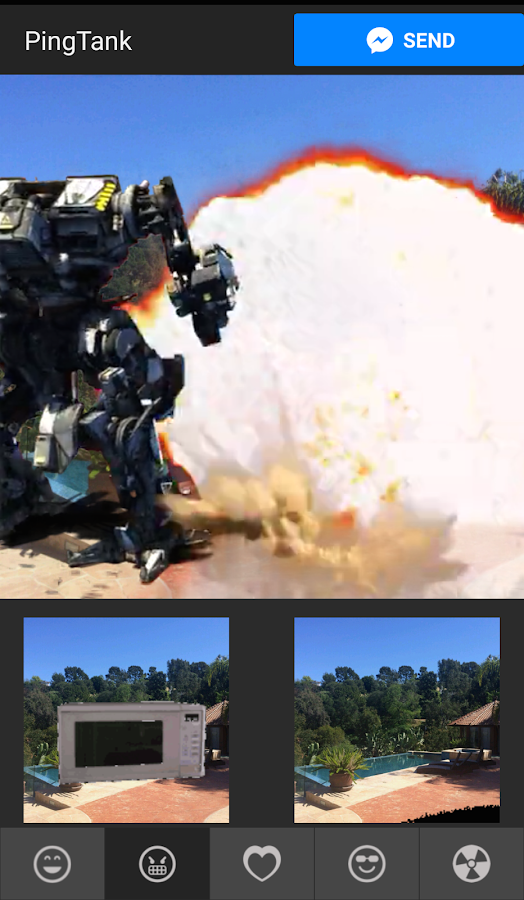 I wonder if Mark Zuckerberg made sure it will stay an exclusive app for Facebook Messenger or if soon we’ll be able to use PingTank wherever we want. It would be a huge hit on Instagram and Twitter for certain and it is what the users are actually asking for. There is some slight and understandable frustration that there is no ‘save’ option for the animated pictures and that there is no option to share the animations on your Facebook wall either. It really is a messenger only app and with that PingTank may have been able to establish itself quickly, but at the same time they are really limiting themselves. It’s no secret that Facebook users are aging and that the younger generation (which will be using this app the most) are not all that impressed about being on a social media platform with mom, dad and often their grandparents as well.

Either way, it’s a really cool and original app which just goes to show that there is still so much left to invent and discover on the Internet. Surely, there will be more like it out there soon which the user will be able to use on any social media app/platform of his or her choice, but right now it’s the only app that lets you pimp your pictures…animated style!